Since the sound is a bit dodgy in the video, I've also added some audio that I recorded from this circuit directly.

Two Oscillators with Cross-Fader by mattbradshaw
Posted by matt at 22:42 No comments:

In a rather exciting step forward, I have created an oscillator. It is less novel than the other circuits I have posted thus far (it came straight out of this book) but it is exciting because it is theoretically the basis for a whole synthesizer!

Technical info: I think this is theoretically supposed to produce a square wave, but I've analysed the waveform in Goldwave and it's actually a triangle wave at high frequencies, suddenly changing to a bizarre (though still consistent/regular) waveform for which I know no name. I have no idea why this happens, but the weird waveform sounds particularly cool.
Posted by matt at 18:39 No comments:

The wah pedal: a brilliant, powerful sound effect housed in a difficult-to-control box. Who has that much control over their feet, really? The pedal's onomatopoeic name comes from the difficulty that guitarists have in creating any other sound with it. Here is one solution:
Technical info: I have cheated slightly in making this effect, or at least deviated from the obvious route. Purists might have expected me to pull apart a Cry Baby pedal and replace the rocker pedal section with a photoresistor. Instead (mainly because I don't own a proper wah pedal), the Arduino reads the voltage across the photoresistor every few milliseconds and sends an appropriate MIDI control change signal to my Behringer LX210, a cheap-but-loud guitar amp which has built-in effects and inexplicably (but commendably) contains MIDI in and out ports, giving control over every single setting on the amp. As before, MIDI communication is achieved using the Arduino's serial port via a MIDI socket and some crocodile clips.
Posted by matt at 00:52 No comments:

Automation has shaped our society over the last century. It has put people out of work in many trades, but musicians have not yet fallen foul of this phenomenon to any great extent. As the glockenspiel player in a mildly popular Oxford band, I don't feel under threat from the robot uprising just yet. But perhaps I am a masochist, because I appear to have created this: the laser-controlled glockenspiel. It may only boast one working note, zero dynamic range and a questionable level of ocular safety, but it's got a laser in it. It'll be a few years before I stop regarding that as cool.
Technical info: The Arduino is running a program which triggers the servo motor when the value of the photoresistor corresponds to the laser not shining on it. The programming for the servo was a matter of trial and error, regarding the speed of the up and down phases of the movement and the target angle (which can be fine-tuned either within the code or by deforming the blue-tack that holds the servo in place). It isn't the most elegant solution, but I'm currently in a proving-stuff-could-work phase rather than a making-durable-stuff-to-use-at-a-gig phase.
Posted by matt at 00:18 2 comments:

In the last few weeks, I have rather fallen in love with electronics. I bought an Arduino (a programmable circuit board with lots of sockets for connecting other components) and have been tinkering ever since. Below is a video of my first successful attempt to send data from the circuit board to my synthesiser.
Technical info: The Arduino is running a simple program which changes the pitch and length of the notes it is outputting according to the position of the linear potentiometer. The notes are being played on a Micro Korg, which is receiving MIDI data from the Arduino's serial pin (via a standard MIDI socket, connected with crocodile clips). The cool part, as far as I'm concerned, is that the Arduino is not connected to a computer in this clip; once the program has been uploaded to it, it can run it using just a 9V battery.
Posted by matt at 23:57 No comments:

I've always wanted a guitar that could do everything. In the next few months this may become a reality. I want to reveal details gradually, but here is a peek at what my friend (and luthier) Tom Handley has been doing for me recently: 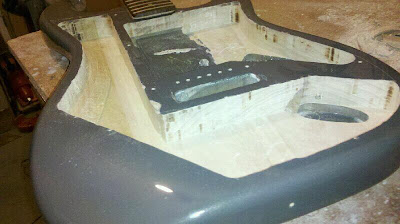 All that space will be filled with sensors and circuitry. Where most guitars have a single, simple signal connection to the outside world, this will have approximately seven. I shan't reveal any more just yet. Wait and see.
Posted by matt at 22:31 No comments:

Welcome!
This will be an online diary of my technological exploits, which are predominantly musical in nature. There will be tackily colourful virtual creations with which you will be able to interact online (I am a Flash programmer by day), videos of poorly-soldered Heath Robinson contraptions (I have just got into electronics) and perhaps even the odd piece of software that will be useful for fellow musical experimentalists (I am just learning Python).
I apologise in advance for any technical language, whether apt or jibberish, that may occur within these posts. Casual (normal) viewers are excused the written content and may jump straight to anything with a play button.
Enjoy!
Matt
Posted by matt at 13:37 No comments: