Yesterday, I published my first music app to the Android Market. The app is pretty unhelpful, inefficient and ergonomically unsatisfying, but the point is that it works, it's been published, and it was completed in roughly a day. I wanted to go through the process of designing, writing and publishing an Android app to see what was difficult and what wasn't. Here are some things I learned:

1) Although audio latency in Android is woeful, the stability of the audio stream seems pretty decent.
2) Flash makes it very easy to write and package apps, but it's very easy to slow an app to a standstill if you're not careful.
3) The search functionality in Android Market is geared towards showing people the top twenty apps for a particular search term, which is not great for small developers.
4) I've just realised that this blog has become nerdy and technical. Sorry. Here is the link to the app:

The guitar has entered the construction phase. Wednesday evening was spent in the company of Mr. Thomas Handley, who is responsible for any sawing, drilling and routing required for the project. I won't go into details now, but behold the image below! Six rotary potentiometers, happily mounted on a bespoke transparent secondary scratch-plate, successfully wired to the main circuit board, with a superfluous red LED thrown in for good measure. I have realised today that wiring this monstrosity is going to be an horrendous task; the confined space and my total lack of soldering ability are conspiring against me. And yet wires can be squashed, and solder can be poked at random until it forms the desired shape, so perhaps I will prevail. Here's the photo: 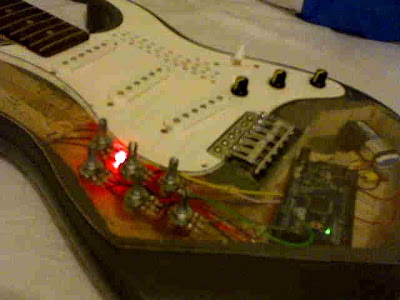 This is an addition to the "strummable resistors" from yesterday. I set up my guitar so that whenever a string was fretted (pushed down against a particular fret), a circuit would be completed. A different chord is assigned to each fret and any strumming data then corresponds to the notes in that chord. Results shown below:

Technical info: I am aware that there are far too many wires in this video.
Posted by matt at 15:20 No comments:

Here's a quick preview of a feature that I'm rather excited about including on my guitar: strummable contacts. Many of the sensors that I am adding to the guitar are really just identical controls to those you would find on a synth or sampler, such as buttons and knobs, but I'm also really interested in any sensors that will exploit the playing style of a guitar.

My idea is to have six metal contacts, spaced to match the guitar's strings but located just below the bridge, and a metal plectrum that will complete a circuit whenever it comes into contact with one of the six "virtual strings". When twinned with a way of specifying chord shapes, this design allows for strumming or finger-picking via MIDI.

Below is a video showing a test of the design, using resistors as contacts and the end of a wire instead of a metal plectrum. Buttons are used to specify the chord shape; I hope to incorporate a more imaginative method in the final design.